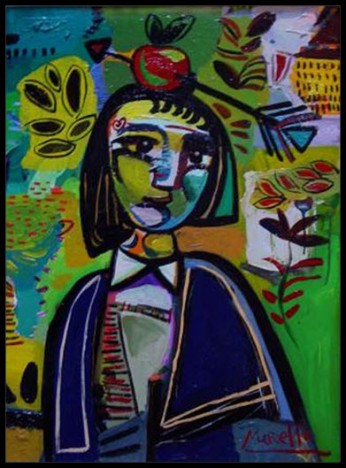 The Span of Zeal – The 1st Hemisphere of Gemini

Dr. Marc Edmund Jones provides the official meaning of this Sabian symbol in his work, The Sabian Symbols in Astrology:

Gemini 9° A quiver filled with arrows

This is a symbol of extreme alertness to the interests and needs of selfhood, and of high competency in pursuing any and all practical ends in view. There is a basic emphasis on the inalienable right of man to make demands on his fellows, or to bring to his service whatever may help him hold his place in the scheme of things. Here are the fruits of the self-discipline and training which equip an individual with the skills for which he will have continual use.

The keyword is PREPARATION.

When positive, the degree is unlimited personal capacity for rising to the issue of the moment on any level of experience, and when negative, querulous overconfidence and quixotic notions.

The Tale of William Tell

At last a target did unveil:
An apple at one hundred yards.
But William’s face grew ghastly pale.
He ne’er suspected such dark cards:
The apple sat on Walter Tell,
The humble son of William Tell.   Hm. Nes

Can you imagine? You’ve been told that both you and your son are to be executed for not bowing to a hat on a pole. The only chance to save your lives is to prove your marksmanship. You must split the apple atop your own son’s head. Such were the circumstances of William Tell on November 18, 1307 in Altsdorf.

“William Tell was known as a strong man, a mountain climber, and an expert shot with the crossbow. In his time, the Habsburg emperors of Austria were seeking to dominate Uri, and Tell became one of the conspirators of Werner Stauffacher, vowing to resist Habsburg rule. Gessler, the newly appointed Austrian Vogt of Altdorf, raised a pole under the village linden tree, hung his hat on top of it, and demanded that all the townsfolk bow before the hat.

“On 18 November 1307, Tell visited Altdorf with his young son and passed by the hat, publicly refusing to bow to it, and was arrested. Gessler—intrigued by Tell’s famed marksmanship but resentful of his defiance—devised a cruel punishment. Tell and his son were to be executed. However, he could redeem his life by shooting an apple off of his son Robert’s head in a single attempt. Tell split the apple with a bolt from his crossbow.”

How did he ever manage to do it under such stressful circumstances? Expert marksman or not, it had to be the most harrowing of situations. His shot, especially now, had to be—absolutely had to be—perfect! His only target, the apple! Focus o arrow and be swift and true! Today’s symbol is preparation. Are you prepared for the most trying of circumstances in which to be an expert marksman? If not, what can you do now to prepare for then?

I have other thoughts on this. The letters composing the word “apple” in The Da Vinci Code unlocked the Cryptex. Why? Because it was the “apple” that Newton saw fall from the tree–the gravity of a situation.

The “apple” is often used to represent the symbolic fruit of The Tree of Knowledge of Good and Evil, of which Eve partook and then gave to Adam because it is better to know truth even if through suffering than to stay forever in a state of ignorance and bliss.

A scripture comes to mind: Matthew 10:34 “Think not that I am come to send peace on earth: I came not to send peace, but a sword.” The sword, or in today’s case the chosen arrow from the quiver, is truth…. 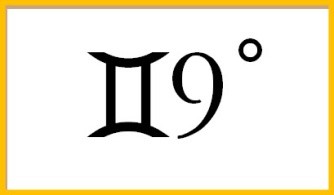 Welcome to the amazing Sabian symbols!

These personal reflections are but an example of one person’s journey of discovery with the Sabian Symbols. This blog series was written in 2014 and 2015, during the last two years of my mother’s life. She and I lived here together in my home, and at the end of each day I would sit and write my reflections on each symbol. At that time I had studied the Sabian symbols for seven years. However, these blogs aren’t interpretations, they are simply my reflections about the symbols. Yet, they hold a very sacred place in my heart and in my memories. I have edited them lightly over the following years, but always preserving the essential feelings and energies surrounding that first attempt at writing about them. When this series is done being edited, around Scorpio season, I will most likely go on and begin a new blog series. Much has changed over the past nearly nine years! I have many other things I’d like to share about the symbols. But, for now, this is the first cycle of reflections.

If you are interested in beginning your own adventure with the Sabian symbols, I encourage you to begin keeping a set of notes of your own thoughts. You might begin your quest with drawing a Sabian symbol from the Sabian Oracle. You can find it by clicking the link below. Enter the time of the draw for later reference.

Draw a Sabian symbol from the Sabian Oracle!

You can find more of my works on my website at SabianGeometry, on YouTube at Sabian Geometry or on  Facebook at Sabian Geometry with Saijin. If you are interested in studying the Sabian symbols in their models of the Cross (4-fold) and the Star (5-fold), I invite you to purchase my book: On the Shoulders of Giants: Advanced Techniques in Sabian Symbology. The Sabian Symbol Septenary (7-fold model) is available to read on WordPress or if you prefer to  listen, on Spotify.

*All of my works are based on Sabian Symbols in Astrology by Dr. Marc Edmund Jones, 1953 First Edition.